Celebratin​g our first four years on the Road to Hollywood 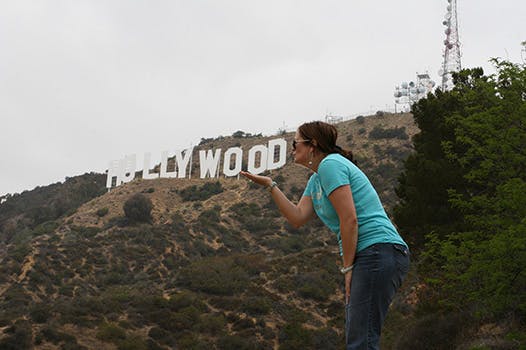 As I contemplate the 4 year anniversary of our company launch on August 12, 2010 so many things cross my mind.  First and foremost is how much I have come to love Hollywood.  To let you in on a little known secret, Santa Monica used to be my favorite part of town.  Then I became a tour guide and now it’s Hooray for Hollywood!   There have been some changes along our Sites & Bites tour route, which means over the last four years no two tours have been exactly the same.  There’s always something new and exciting to tell our guests while we’re on the Road to Hollywood.

When we led our first Hollywood Sites & Bites Tours, we showed guests the famous hand and footprints in Grauman’s Chinese Theatre’s famous courtyard.  Today that same movie theatre has been transformed into an IMAX screen and is now called the TCL Chinese Theatre, thanks to a sponsorship from a Chinese electronics company.  There are several new hand and footprints that have joined the ranks of other movie stars including Cher, Robert Di Niro, Sandra Bullock, Jane Fonda, Ben Stiller, Jackie Chan and Melissa McCarthy stepping in wet cement as recently as July 2014.

Just a few steps from the Chinese Theatre, we used to walk our guests up the staircase leading to the Kodak Theatre, the home of the Academy Awards ceremony since 2002.  Then in early 2012 things changed for the Kodak corporation and within a few months a name change was announced, introducing the Dolby Theatre.  Whatever the name on the front of the theatre, we still love telling tales of past Oscar ceremonies and award nominees.

In 2013 Hollywood celebrated the 90th Birthday of the beloved Hollywood sign, which originally said Hollywoodland, a giant billboard to advertise a housing development in the area.  This year Hollywood marked the Centennial of the Squaw Man, the first feature-length film made in Hollywood by Cecil B. DeMille in a rented horse barn.  That same barn is now a beautifully restored Historic Landmark known as The Hollywood Heritage Museum, and sits on Highland across from the Hollywood Bowl.

In terms of our restaurant line-up, we said goodbye to Roscoe’s House of Chicken and Waffles and the Chado Tea Room.  But we gladly said hello to Mozza2go and John Kelly Chocolates, welcoming tastings of celebrity chef pizzas and luxury chocolates!   We also brought Grub Restaurant onboard with tastings of their locally famous crack bacon, and even newer to the lineup is regional Mexican cuisine from Chef Jimmy Shaw’s Loteria Grill.  Susan Feniger closed the doors to STREET and reopened a few months later as the Mud Hen Tavern.  We still think fondly of her special Kaya Toast and millet puffs.  Cupcake fans across America wondered what happened when all Crumbs Bake Shops closed their doors for good, including the one at Hollywood & Highland.    However, we offer special applause to two of our restaurant partners that have been onboard since our very first tour:  Mashti Malone’s Ice Cream and Greenblatt’s Deli.  We are pretty sure we are responsible for a whole new crop of pastrami sandwich fans!

We know that Hollywood will continue to grow, and with that growth comes change, welcome and unwelcome too.  This week the Hollywood Walk of Fame will see the 2,527th star placed on the Walk of Fame.  And just today that same Walk of Fame has been turned into a shrine at the star of the talented Oscar-winning actor Robin Williams, who left this world too soon.  We at TOURific Escapes have loved every minute (well, almost) of our first four years on the Road to Hollywood, and look ahead to a bright future!