CLOONEY, TARDIS, TINSELTOWN AND ME 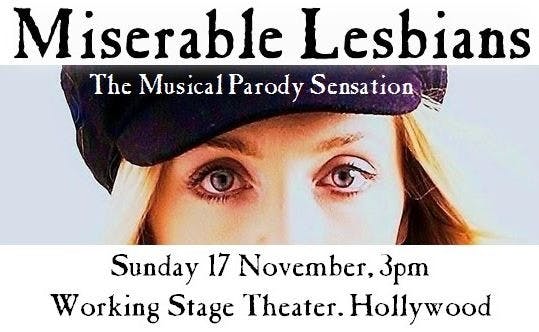 What do George Clooney, singing lesbians and a 900-year-old Time Lord have in common? The answer is they will all play a big part in my life this month.

The next few weekends in November are packed with the kind of fun showbizzy events that made me move from England to Los Angeles in the first place.

First up is a night partying with George Clooney, Julia Roberts, Sean Penn, Sir Ben Kingsley and Benedict Cumberbatch on Saturday November 9 at the Beverly Hilton Hotel. They and a bunch of other A-list stars will be attending the Britannia Awards, an annual ceremony of the British Academy of Television Arts in Los Angeles, of which I  am a proud member. The event sold out weeks in advance but if you don’t have a ticket then be sure to watch the highlights of the ceremony on TV – in the US on BBC America on November 10 and in the UK on Sky Movies on November 11.

The following weekend, Sunday November 17 at 3pm, I will direct and appear in a return LA performance of the hit comedy stage musical I’ve taken around the world this year, Les Miserables parody, Miserable Lesbians.  Please come and see me at Hollywood’s Working Stage Theatre by booking here http://miserablelesbians.eventbrite.com/

Then on the morning of November 23 I host a special LA event celebrating the 50th anniversary of the world’s longest running TV series, and my favorite show of all time, Doctor Who. I’ll be interviewing special guests, running a trivia game and costume contest all leading up to a special live screening of the show’s 50th anniversary episode which can be enjoyed with Dalek-table cocktails and Cyber-snacks. Book here for that one https://drwho.eventbrite.com/

The Dr Who event is being held at LA’s Cat and Fiddle British pub, aplace which has special meaning for me already because it is featured on my Celebrity Insider Movie Locations Tour. For part of the building was used as a location in classic movie Casablanca.

There are lots of exciting events ahead but the biggest excitement in any week is meeting movie fans who come on my tour. So book now at www.tourificescapes.com – we still have availability for November 9, 16 and 23 and future dates – and I’ll tell you the behind the scenes scoop from these and so many other star studded events.