When one of my friends asked where I would visit first when restaurant restrictions were lifted, I did not hesitate. I would visit Greenblatt’s Deli for a pastrami sandwich followed by a scoop of ice cream from Mashti Malone’s ice cream parlor. Both of these family-owned Hollywood eateries have been on our Hollywood Sites and Bites tour since our company launched in August 2010. That’s right, we are coming up on our 10 year anniversary! The food, the staff, the owners, their stories have become an integral part of what makes this tour special.

So on a recent Saturday, I checked the Google listings first to confirm operating hours. Then I placed an order on the Greenblatt’s Deli website for two sandwiches, pastrami on rye and brisket on sourdough with au jus. Decided on two different sides, coleslaw and potato salad. I should add, Greenblatt’s coleslaw is some of the best you’ll ever have! A pop-up on the screen indicated the next available pickup was in 30 minutes time and would be through contactless pickup at their front door. So I hit the order button, paid with a credit card, and headed to Sunset Boulevard with much anticipation. 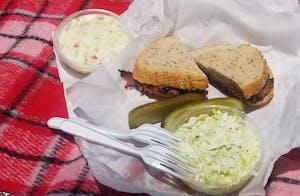 When we got to the front door, there were several people waiting on the sidewalk socially distant from one another, so I went right up to the door, which had been made into a window with protective plexiglass, and saw one of my favorite staff members, Jamal. We had a quick chat and I peeked in to see the tables empty. A few minutes later he came back to the window with our order, and off we went for a picnic. Matt had done some online research and took us to a nearby grassy area at Hollywood landmark, Wattles Mansion and Gardens. We were not the only ones with the idea to enjoy the fresh air and sunshine. Lots of dogs were there, so we kept Jiggy close by while we enjoyed our delicatessen picnic. And oh how good that pastrami was!

Next we headed to our favorite Hollywood ice cream parlor, the unique Mashti Malone’s, at the corner of Sunset and La Brea. When we arrived, Mashti’s daughter and store manager, Azi, saw us through the window and motioned us in. She was helping a family of three who were taking a weekend staycation from Claremont. We stood by a sign near the front door indicating that only one family at a time was allowed in the ordering area. As soon as they had paid and exited the store, we moved to the ice cream cases to order. Of course the new protocol means ice cream samples are no longer available, but I have tried all Mashti’s flavors many times over so I knew exactly what I wanted. I splurged on a triple scoop as I wanted to enjoy as many flavors as I could: pistachio-almond, coconut-pineapple and mango. Matt chose a really interesting combination, Turkish Coffee with Herbal Snow. Two of Mashti’s signature flavors. We sat at the patio table outside and when Azi had a break between customers, she came out to visit and give Jiggy a hug. 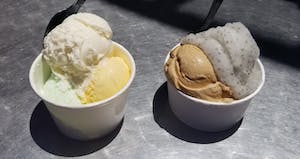 This was such a special, much-anticipated outing to our two long-standing tasting partners. While the Hollywood Sites & Bites tour is on pause, I will visit our tasting partners on my own, to show support during this uncertain time, and also get my fill of their good food. During the stay-at-home orders, we have mostly been doing takeout from our neighborhood eateries near LAX. But I have been compiling a long list of other LA area restaurants to support as soon as restrictions open further. It may take awhile to get through the list, but this particular Saturday picnic in the park was a good start.