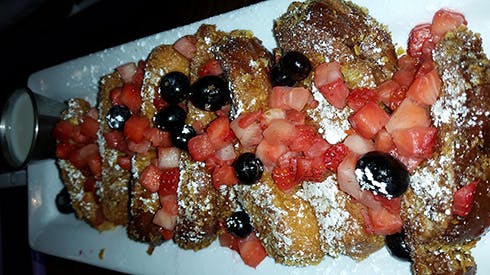 The Blu Jam Café on Melrose always (and I mean always) has a big group of people waiting on the sidewalk for a table.  I have always wondered what the fuss was about.  Literally every Saturday when we drive down Melrose Avenue on our Hollywood Sites & Bites Tour there is the crowd.  Recently I had some friends in town from Portland, Oregon and while on our tour they saw the crowd and were fascinated.   They suggested we meet there for breakfast before their flight on a Monday morning.  I thought no problem, there won’t be a wait AND I’ll finally get to try the goods at Blu Jam Café.  Well, was I wrong.  On a non-holiday Monday the place was packed and we had a wait.  Not a long wait, but a wait.

Breakfast is served all day, 7 days a week.  First thing I ordered was a fresh squeezed juice of orange, grapefruit and ginger.  Then my friend Liz and I noticed almost every table had a plate of Crunchy French Toast topped with beautiful berries, and our server confirmed in fact that was one of their most popular breakfast plates.  On the menu it is highlighted as “Our Signature Dish”.  So we decided to share a plate as well as an order of Morning Hash (eggs, potato, ham and spinach) so we could have both savory and sweet for our breakfast.  I have to tell you, I was in heaven.  The French toast was a perfect texture, the slices (you get 8 total in an order) were a nice little size and the berries on top were a nice touch.  The vanilla bean sauce was a great pour-over in place of syrup.  The hash was delicious too, but I have to say that French toast was out of this world.  I rarely order the same dish twice, but I would go back to Blu Jam just for their signature Crunchy French Toast.  For this reason I am declaring the Crunchy French Toast at Blu Jam Café as my best bite of the week.