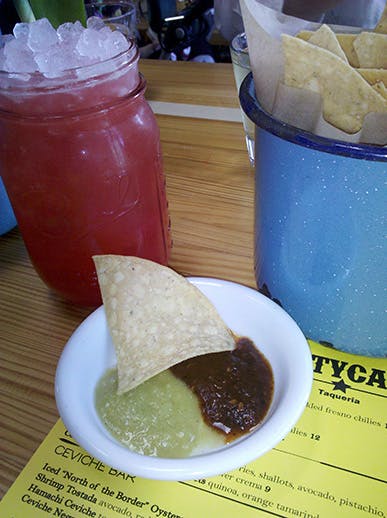 A new place opened on Beverly Boulevard in spring of 2013, and the name alone was catchy enough to make me want to dine there: Petty Cash Taqueria.  You may know that over at TOURific Escapes headquarters, we dine out regularly.  When you run food tours, it’s part of the research that needs to be done, keeping up on the growing food scene in Los Angeles.  It’s a hard job but someone has to do it!  So when a friend recently suggested meeting at Petty Cash Taqueria, I couldn’t agree fast enough.  She had seen them featured on a Top Ten List of Mexican Restaurants in Los Angeles.  Another thing we love at TOURific Escapes is lists, especially when they highlight food and travel.

So our evening began with chips (complimentary, but only upon request) and two lovely salsas, a red and green.  We of course had to order the guacamole, which was tasty and unique in that it had a generous sprinkling of pepitas (pumpkin seeds) throughout, in addition to bright red tomatoes and of course the beautiful smashed avocados.  I always love to order a refreshing, colorful aguas frescas if they are available and that evening Petty Cash Taqueria was serving strawberry, plum, pineapple and raspberry  (all mixed together, and it was deelish).

The star of the Petty Cash menu are their tacos, which are served a la carte, and on a soft tortilla so they are easily shared.  We shared and enjoyed two different pork tacos.  However, for me, the real star of our meal was the quesadilla.  I usually shy away from them because I feel like they have way too much cheese.  The quesadilla we chose was filled with zucchini blossoms, red Fresno chiles, a small amount of jack cheese and held together by THE most amazing flour tortilla I’ve ever had.  Like butter, melting in your mouth.  Although the whole meal was note-worthy, including the bunuelos and chocolate sauce for dessert, it is the Zucchini Blossom Quesadilla at Petty Cash Taqueria that makes my best bite of the week!