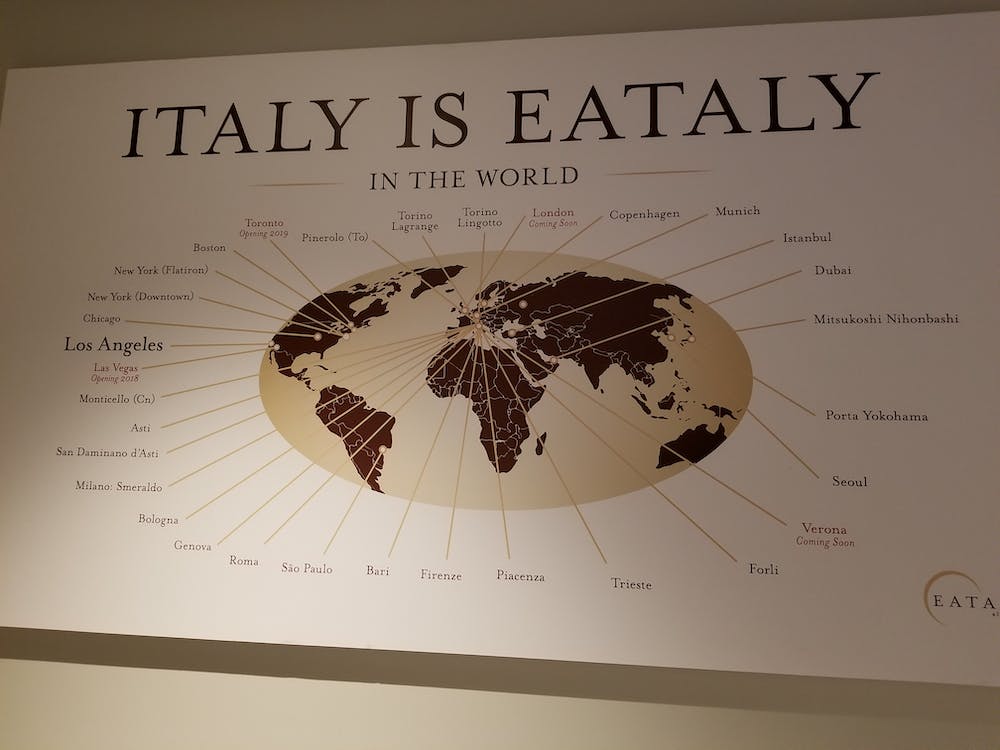 After months, really years, of hungry anticipation, Eataly Los Angeles opened their doors in early November.  The location?  The Westfield Century City Mall, which is a massive indoor/outdoor shopping center that just completed their own gorgeous renovation.  Eataly Los Angeles, the also massive Italian marketplace, offers almost 70,000 square feet of Italian goodness and towers over a big corner of the mall visible from Santa Monica Boulevard and Avenue of the Stars.

I first became aware of Eataly because of my food-tasting tours.  One of the tasting stops on our Hollywood Sites & Bites Tour is Mozza2go, the take-out and pick-up pizzeria that is part of the Mozza-plex on Melrose and Highland, co-owned by Mario Batali, Joe Bastianich and Nancy Silverton.  Out-of-town tour guests would ask me if I had ever visited Eataly, an Italian food emporium, with locations around the world.  In the US, two Eataly locations can be found in New York, along with Boston, Chicago, now Los Angeles and later this year Las Vegas.  There are more than twenty international locations, with more on the way.  AND get this, a 20-acre culinary theme park called Eataly World recently opened in Bologna, Italy.  But that’s another blog.

So then I started to research the whole concept and learned that Eataly was founded and created in Turin, Italy just 10 years ago (January 2007) by entrepreneur Oscar Farinetti.  According to Eataly’s website, Mr. Farinetti’s goal was “to make high quality Italian foods available to everyone, at fair prices and in an environment where people can shop, taste and learn.”  Not only was he able to make connections with small-scale food producers and artisans, but his concept really paved the way for this “food hall” trend that has hit the US in recent years.  Some have even called Eataly an Italian version of Costco (there are samples if you ask!)

In August 2010, the first Eataly hit the United States in partnership with Mario Batali and Joe Bastianich’s hospitality group, debuting a 50,000 square foot location on NYC’s Fifth Avenue.  Joe’s mama Lidia Bastianich is also part of the package.  In fact Lidia Bastianich will serve as the dean of the Cooking School at Eataly Los Angeles, overseeing a variety of classes offered almost nightly.

Fast forward to Friday, November 3, 2017 when Eataly Los Angeles opens their doors to the eager public.  Just for fun Matt and I made the trek to Century City to check out all the excitement.  The first 100 people in line for the 6pm opening were treated to a fresh ball of mozzarella cheese.  Well, let’s just say as a rough estimate there were about 400 people in line that wound all around the shopping center.  So instead we ate dinner in the newly revamped food court and by the time we were done, the line for Eataly had barely moved.

The very next weekend I played hostess to out of town friends who also share my Italian heritage and my passion for Italian food.  We got to Eataly Los Angeles right at 9am anticipating a big Saturday morning crowd, and I am happy to report there was only a short wait until the doors opened and we were in.  Suffice to say we were a little overwhelmed at first, so I suggested we sit down over a cappuccino and pastries and plot out our time there.  Let’s just say two and a half hours later we had to drag ourselves out to get some fresh air and get to our next event.  But did we have fun!  You can see from some of these pictures that we visited the Salami and Cheese counter, Eataly Market, which is home to lots of quality Italian and local foods, the Chocolate Shop, and more.  The sit-down restaurants had long, long lines so we opted to enjoy quick snacks from the walk-up counters.  The gelato case and the cannoli and bomboloni station will have to wait too, as we could only eat so much in a few hours.  I do feel like I got a pretty good grasp of the lay-of-the-land and I know I will have many, many more return visits in my future to check out even more Italian goodness.  I have just one thing to say, Eataly welcome to Los Angeles!