Is fancy toast the new cupcake? 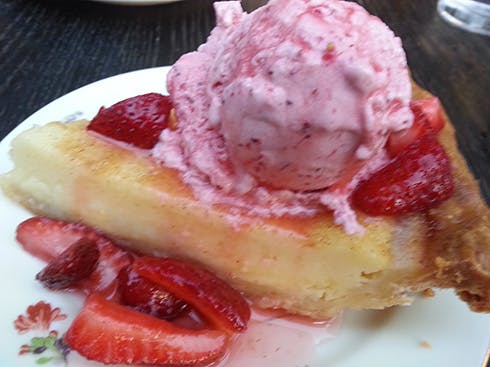 I recently spent $4.50 for an order of toast and jam, which is actually more expensive than the fanciest cupcake in town.  I want to thank my favorite blogger Lynn at The Actor’s Diet for this.   I read her posts daily, drooling over the pictures and descriptions of her meals around town, and she managed to make even toast and jam sound delectable.  There are several places around LA that are known for their fancy toast, with one being Sqirl in Silver Lake.  Actually I think their homemade jams came first, and so it made sense for them to offer equally impressive bread for spreading.  I have to admit though, I have not made it across town to sample the goods at Sqirl yet.  But Lynn has also mentioned a coffee shop on Larchmont called Go Get Em Tiger.  When I found myself there last week doing research for an upcoming Chocolate Tour, I knew exactly where I would stop for a mid-morning snack.

For my $4.50 I was given the option of wheat toast or brioche.  I didn’t have to think twice, and went with the brioche.  It took a few minutes for the bread to toast and spread with a nice layer of butter.  I was not asked if I wanted this, but I would have said yes anyway.  In the meantime, my iced coffee arrived, which was made with almond-macadamia milk and was delicious.  As I picked up my plate, the server told me that I would really enjoy the jam, which was a Santa Rosa plum jam.  And he was right!  Not only pretty in color, but equal parts sweet and tart.  I carefully spread the jam just before taking each bite, to make sure I had enough.  This was a lovely experience, enjoyed in a very cool space.  In looking over the menu, I saw several toast options of the savory variety.  I have blogged about two different experiences with avocado toast, but this was my first splurge on good old toast & jam.  Go Get Em Tiger!