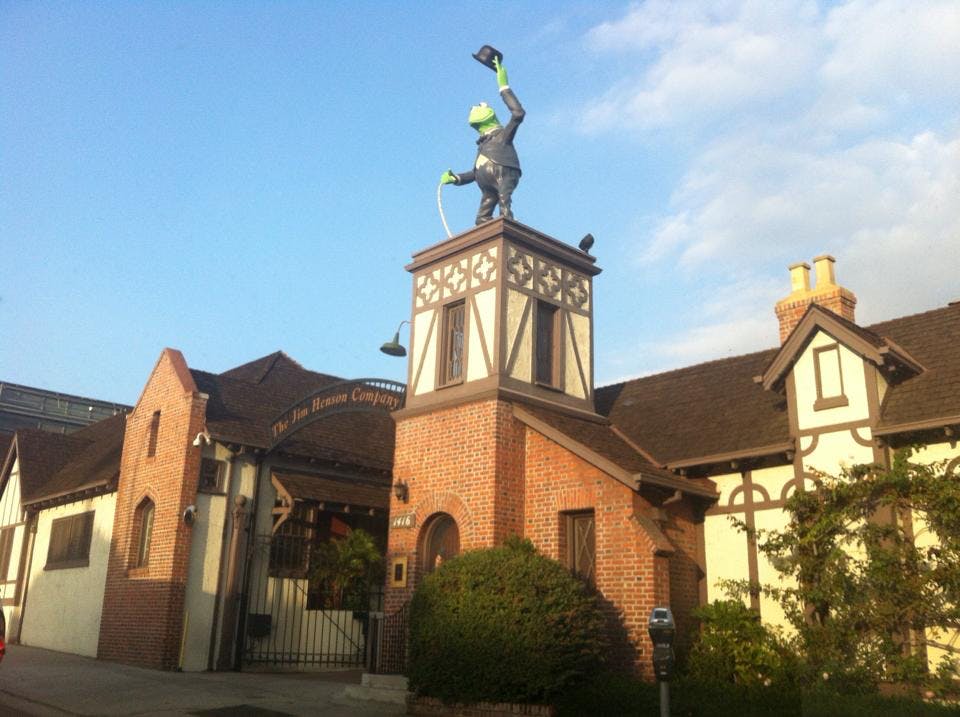 With the Muppets back on TV, each Tuesday night on ABC, it’s the perfect time to talk about the first sight on my Movie Locations Tour – their traditional home.

The Hollywood headquarters of The Jim Henson Company, creators of Kermit and co, was featured as Muppet Studios in 2011 movie The Muppets.

I recently went inside the historic building to meet company president Peter Schube and tour the facilities there.

Even though the company no longer owns the Muppets – having sold the rights to Disney several years ago – the legacy of those loveable puppets is everywhere in the building from logos to signs, posters and plush toys.

A statue of Kermit even stands atop the entrance – wearing Charlie Chaplin’s Little Tramp outfit in tribute to the fact that before Henson moved in, the La Brea Avenue location was the site of Chaplin Studios, where he made classic films like City Lights and the Great Dictator. The Chaplin Stage, home to all those films, still stands but has been recently converted to a digital and motion capture studio from where the Henson team are currently shooting a new, hi-tech, children’s Tseries for Netflix called Jim Henson’s Word PartyMaybe that one could prove to be the next Sesame Street and create even more showbiz history at this famous old building which, by the way, once housed A&M Records too and was the site where music superstars like Michael Jackson, Bruce Springsteen, Stevie Wonder and many more gathered in 1985 to record iconic charity song We Are The World.

There are dozens more fascinating locations to see on my Tourific Escapes tour so book now for and Saturday afternoon and join me for an unforgettable ride into the past, present and future of showbusiness.