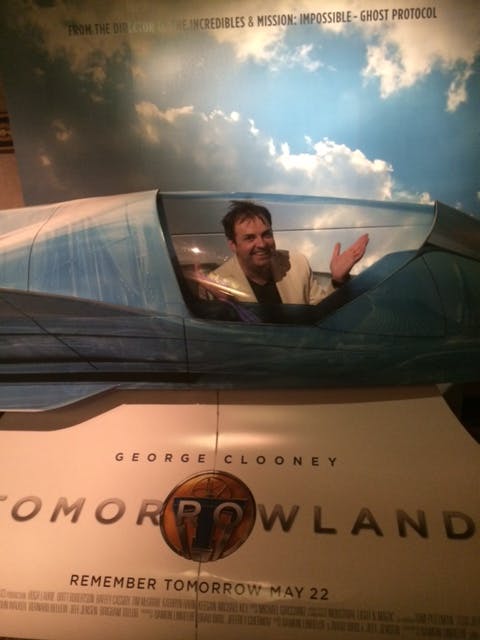 I don’t watch movies in the same way as everyone else.  As well as enjoying the film, I’m taking mental notes of where the scenes were shot so I can mention them on my Movie Locations tour.

In the case of a film entirely shot in LA, such as the Entourage movie or the new Brian Wilson biopic Love & Mercy, physical notes are needed and I take a notebook to jot down the large number of nearby locations I can describe on a future tour.  But then there’s an unusual case like San Andreas which is about an earthquake laying waste to Los Angeles. I didn’t recognize many LA locations in that one but it’s no wonder as the film was actually shot in Australia with Queensland doubling for the Southland!

Talking of summer movies, in addition to the ones mentioned above, there’s some other really good ones still in theaters I urge you to catch if you haven’t done so already.  Tomorrowland starring

George Clooney was smart and terrific, Pitch Perfect 2 was pure pleasure from start to finish and Mad Max: Fury Road was spectacular.  For movie fans like me, the summer blockbuster season is better than Christmas with the gift of more big pictures blasting into the multiplex each Friday.

If you share my passion for films then you’ll love my tour with TOURific Escapes where I not only take you to the places where dozens of past and present pictures shot key scenes but also tell you the story behind the making of those movies.  So come aboard…it’s like a movie theater on wheels!

By Sandro Monetti, Director and Guide of the Celebrity Insider Movie Locations Tour