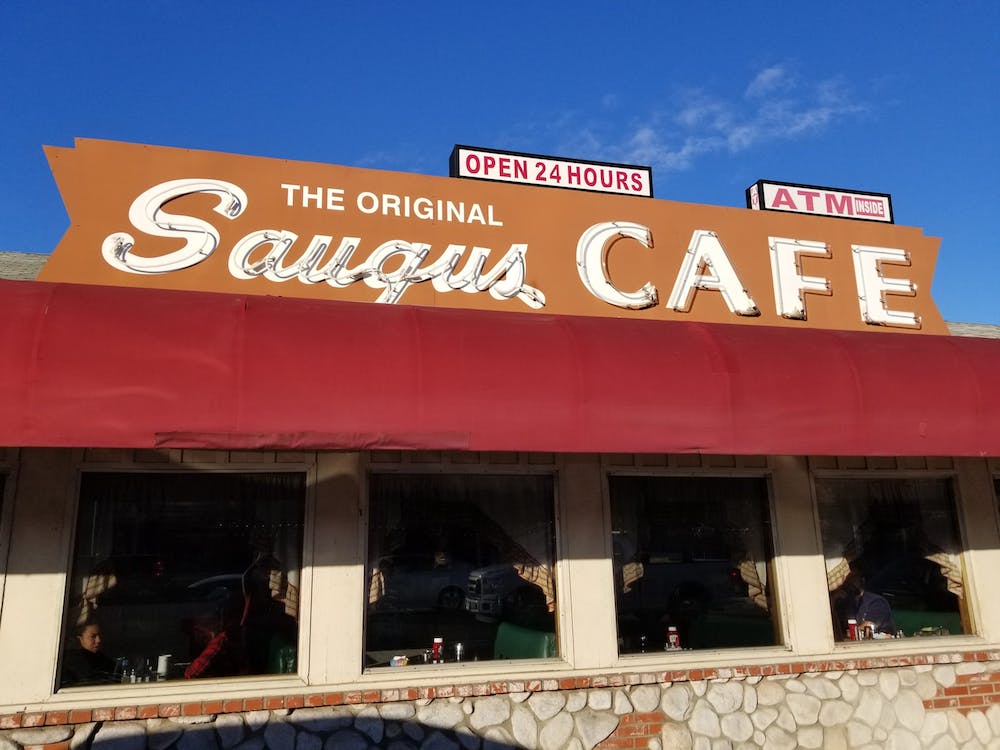 The Saugus Cafe in Santa Clarita can make a claim no other restaurant can make.  They are the oldest restaurant still operating in Los Angeles County!  The Saugus Cafe actually began as The Saugus Eating House, and was attached to a busy train depot as part of the Southern Pacificrail network. The restaurant debuted in 1886, and allowed passengers on the train a chance to get off, stretch their legs and grab a bite at the cafe.  This particular rail line offered connection between San Francisco and Los Angeles.  In an interesting side note, businessman Henry Newhall (for whom the nearby neighborhood is named) was born in Saugus, Massachusetts, and as a prominent landowner he got naming rights to both the first rail stop and cafe. 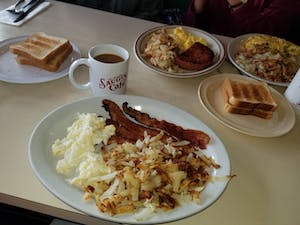 At least two Presidents have dined there.  Benjamin Harrison is said to have eaten at The Saugus Cafe while on a campaign trip in 1890, and later in 1903 President Theodore Roosevelt supposedly enjoyed a New York steak there. The popularity of Western films brought actors and crews to the greater Santa Clarita Valley, and The Saugus Cafe became a hangout for folks in the entertainment industry. John Wayne and Clark Gable among others, spent hours there while away from the film set.  However, the rumor that James Dean ate his final meal at The Saugus Cafe before his fatal car accident is not true.  I have dined there on a few occasions, invited by TOURific friends Angela and Allen who lived in the Santa Clarita area.  I can attest to the hearty, filling breakfast plates, and outstanding coffee, served with a smile at Saugus Cafe in Santa Clarita.  If I lived closer, I would definitely visit more often.  I’ve said it before, breakfast is my favorite meal of the day and any chance I get to enjoy a big plate of breakfast food with friends, I am all in!

I heard recently that the Saugus Cafe in Santa Clarita is in danger of closing due to the Covid-19 dining restrictions.  They, along with so many other Los Angeles restaurants, need outdoor dining to resume to stay in business.  It would be a shame for this historic eatery to close after so many years in business.  But it’s a reality we have had to face since March 2020 when LA has said goodbye to many favorite restaurants.  It was heart-breaking when long-time dining staple Pacific Dining Car announced the closure of BOTH of their locations in Santa Monica and Downtown LA.  A few other long time local favorites that have closed during the 2020 pandemic are Nick’s Cafe in Chinatown (another fab breakfast spot known for their ham and eggs), Taste on Melrose, Cliff’s Edge in Silver Lake, Fig and Olive on Melrose Place, Patina at the Walt Disney Concert Hall, two valley locations of Four ‘N Twenty (where I have purchased beautiful pies), Arcadia’s Din Tai Fung (opened 20 years ago as the first American franchise site serving popular Taiwanese soup dumplings), and Stan’s Donuts near UCLA. 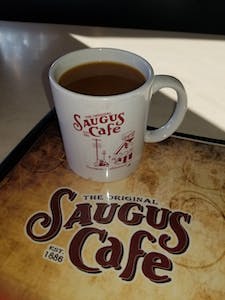 There were also newer restaurants on the LA culinary scene that I never got a chance to try before they closed, and they include Ma’am Sir, Bon Temps, and Dialogue to name a few.  I know restaurant people are resilient, and hopefully these talented folks will find themselves in different creative endeavors when the restrictions have lifted, but so much time, money, blood, sweat and tears go into opening and running a restaurant, it is just heart-breaking to read about all these closures. Nobody was expecting this Pandemic to hit so hard and for so long.  I just read a statistic that only 30% of restaurants can expect to make it to the five year mark.  Wow.  That is another reason why it’s so incredibly important to support and keep alive our legacy restaurants such as Musso & Frank Grill in Hollywood, The Formosa Cafe in West Hollywood and now The Saugus Cafe in Santa Clarita.  LA’s history needs them.  And so do we diners.  If you find yourself in the Santa Clarita area,stop by and show The Saugus Cafe some love!