Where to eat near The Hollywood Pantages Theatre 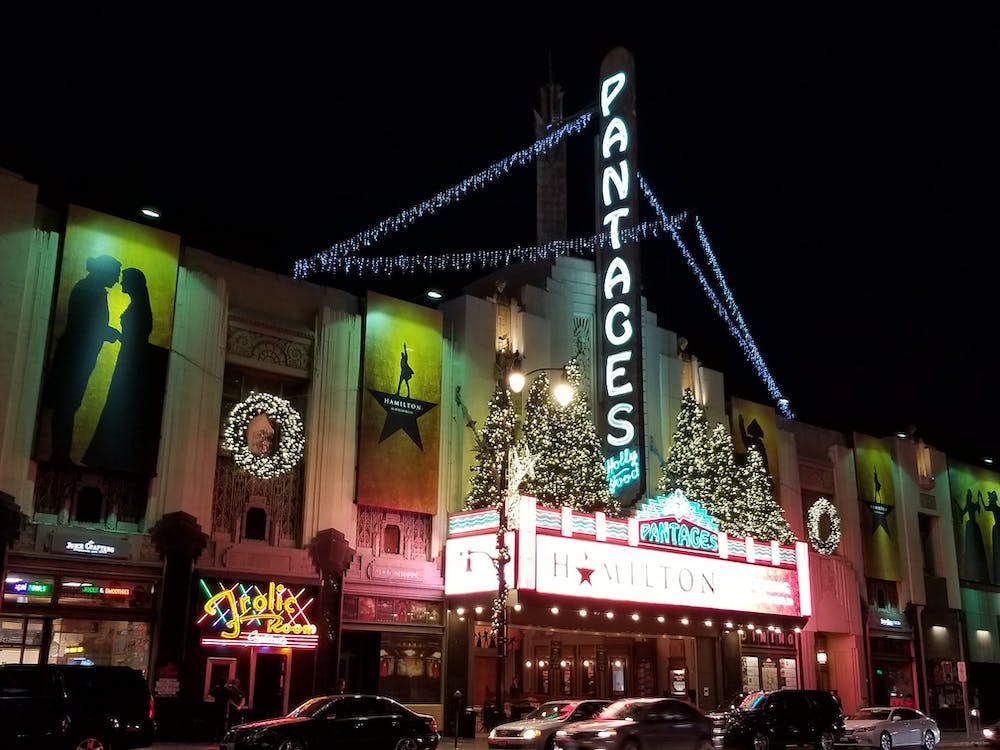 Within walking distance of The Hollywood Pantages Theatre and coming in at what I would consider casual, both in terms of ordering, pricing, and faster dining there are several places that I have enjoyed.  The Pie Hole started in DTLA and now has several locations around town, with one being at the corner of Hollywood and Vine, and serving a variety of both savory and sweet pie slices.  When I saw Waitress at The Hollywood Pantages Theatre, the line was OUT THE DOOR at this place.  Makes sense, being that the theme of the show was based on a pie shop.  For good hamburgers, I recommend both Hollywood Burger and Shake Shack.  If you enjoy Mediterranean food, there is FEAST Kitchen & Grill which is a quick-serve option with plated dinners, bowls, wraps and salads.  For healthy salads, Greenleaf Gourmet Chopshop is nearby.

For a fancier sit-down dinner, but still near The Pantages Theatre you’ll enjoy Wood & Vine, Delphine in the W Hotel or APL, which is a brand new steakhouse from Adam Perry Lang.  Wood & Vine serves French and American cuisine indoors or on an outdoor patio.  Delphine is found inside the W Hotel, and is also indoor-outdoor with a French inspired menu.  It has one more dollar sign than Wood & Vine, but both are literally ACROSS the street from The Pantages Theatre.

Also on Hollywood Boulevard, but about six blocks to the east sits Musso and Frank Grill and Loteria Grill.  Loteria Grill offers casual but authenitic Mexican cuisine and beverages.  Check out their tequila wall, their oversize pinata and loteria cards adorning the walls!  For a step back in time, Musso and Frank Grill has been in continual business since 1919.  It is one of my favorite places to dine in all of Los Angeles, not just Hollywood.  If only those red leather booths could talk, they might tell us what Raquel Welch had for dinner, or Steve McQueen, Johnny Depp and even farther back in time Charlie Chaplin and Douglas Fairbanks.  But if you ask the handsomely-dressed waiters, they just might tell you.  Ruben Rueda has worked at Musso and Frank Grill for more than 50 years, starting as a teenage busboy and now a celebrated bartender, known for the classic martinis he creates.  The Musso and Frank Grill menu offers a nightly special and if you happen to be dining there on a Thursday, be sure and treat yourself to their Chicken Pot Pie.  Trust me, it’s the best $23.00 you may ever spend.

I also have to mention a hidden gem, the charming Off Vine, for a special pre-show dinner.  It is half a mile south of Hollywood Boulevard, about 2.5 long blocks that could take about 15 minutes to walk.  It is literally “off Vine” on a little street called Leland Way.  It is a restaurant that’s been converted from a craftsman cottage (circa 1908) complete with a fireplace and patio.  Receiving many accolades as a very romantic restaurant, the prices won’t gouge you.  And if you happen to be dining there on a Monday night, you’ll be treated to their Half-Price Monday Night Dinner Menu.
And for a pre or post-show cocktail, do not miss The Frolic Room w

hose colorful neon sign lights up the night sky and has for quite some time.  Some say The Frolic Room is the most historic  and quintessential dive bar in Hollywood.  It was originally a private speakeasy lounge and then opened to the public in 1934 as Bob’s Frolic Room.   Besides being the oldest bar in Hollywood, several movies have filmed here AND several movie stars have enjoyed a drink or two here.  Howard Hughes owned both The Hollywood Pantages Theatre and the The Frolic Room from 1949 to 1954. He added the colorful, artistic neon bar sign above the door that still welcomes patrons today, as well as throwing lavish and wild parties.  Ah, the good old days.

So by this time, I am sure you are hungry and you are probably making your dinner reservations for your special night on the town at The Hollywood Pantages Theatre!